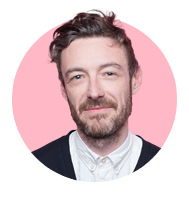 Earlier this year we were lucky enough to be approached by VaynerMedia and Kraft to help them design a new animated commercial for their revamped Jet-Puffed Marshmallows. The brief was to create a fluffy character-based spot that showed a slice of life inside the delicious world of Jet-Puffed Nation.

Early on we could see this would be a great opportunity to bring a tonne of cheeky, dynamic little characters to life (41 in total!). The agency were keen for the marshmallows to have a communal, team work kind of vibe, a connection that meant they were always together, always having fun and enjoying their fluffy little lives. We jumped at the chance to create out own synergistic troupe of minion-y mallows.

In a flurry of marshmallow, rainbows and sprinkles Jet-Puffed Nation explodes into action. We travel down through clouds when a couple of mallows crash land on a Graham cracker, and before they know it the lid crashes down on them, squishing into a two-headed marshmallow s’more treat that splats all over the camera.

In a rolling landscape of Rice Krispie mountains, marshmallows careen down the slopes, covering themselves in cereal before jumping out at us, and straight past a towering stack of mallow buddies painting a rainbow. We follow the painting pals as they jump and skid down a rainbow slide into a caramel river. The mallows just miss a couple of their buddies rowing a chocolate boat towards the edge of a waterfall. A gang of marshmallows happily throw themselves off as the sun sets over the fluffy world. Through a chorus of choreographed marshmallows swimming in chocolate, we burst into a campfire scene lit by moonlight, where a chain of mallows on sticks melt together in the glow from the flames.

We drew inspiration from a lot of animated films, anything where a group of friends act collectively, things like Minions or the aliens in Toy Story. We wanted the characters to have a warmth and togetherness that came from their sociable personalities. Even down to the way they moved, I was inspired by games like LocoRoco, and other motion controlled titles, where character’s movements are collective and cooperative. That’s where we got the idea that they can stack up, and kind of ‘newtons cradle’ bounce each other around. In early concepts we even had versions where they moved in a line like a caterpillar. Probably a little off putting for a food brand!

For the action we took inspiration from classic 80’s Spielberg movies like the Goonies for moments like the slide sequence and the big jumps down the Krispie hills. We wanted the action to be engaging and fluid, like being on a roller coaster that weaves through various areas.

Even the lighting was designed to capture a marshmallow ‘day in the life’. The light changes as we progress getting warmer and later until we find the mallows roasting round a moon lit campfire scene – we wanted to show all the different times of the day that people enjoy the snacks.

It felt early on that CGI was the right way to take the film, we wanted lots of camera movement and multiple characters, but also the unique environment of lockdown meant that we could all work on it from home, logging into our work machines remotely to access the Aardman servers in a way that would have been impossible with stop motion.

Working with remotely with story artists, we created a moving story board, the animatic (below), using 2D illustrations to show the layout and staging of our scenes. This was then interpreted into CGI in a rough version of the film we call a pre-viz, a pre-visualiseation of the final film that lets us plan out the camera moves, sets and performances roughly, as we hone the story. This was a really useful stage as we had a tonne of dynamic camera moves that needed a rhythm and pace. During this phase we also began designing the range of props that feature – paint cans, crackers, boats etc, everything was designed with a chunky, cartoony feel, that felt just right for the bold colourful little world the mallows inhabit.

Once we felt the pre-viz was working well and we felt happy with the layouts, we began developing the performances, adding facial detail, expressions, reactions and emotes, to bring the little marshmallows to life!

Will finished an animation and graphic design degree in 2003 at UWE, Bristol. He has been creating and developing ideas ever since, and now directs commercials and short films for Aardman, completing films for BBC, Innocent, P&O, Toyota, Hellmann’s, Nokia, Channel 5, Sesame St, Braun and more.